Are we about to see a unicorn selloff?

Welcome to The TechCrunch Exchange, a weekly startups-and-markets newsletter. It’s inspired by the daily TechCrunch+ column where it gets its name. Want it in your inbox every Saturday? Sign up here.

Welcome to the weekend! We have a lot of ground to cover today, so pour some coffee, settle in, and roll with me.

Remember when Amplitude direct listed, started to trade, and then ran into a wall when it reported Q4 2021 earnings? It was hardly alone amongst public tech companies in taking a haircut in early 2022, but the scale of its repricing stood. Now, Instacart is undergoing something similar-ish, albeit on the private markets.

Should we expect more private companies to also shake up how they value their share price to better incent new hires to join and current employees to stay? Maybe. GGV’s Jeff Richards had some food for thought Friday: 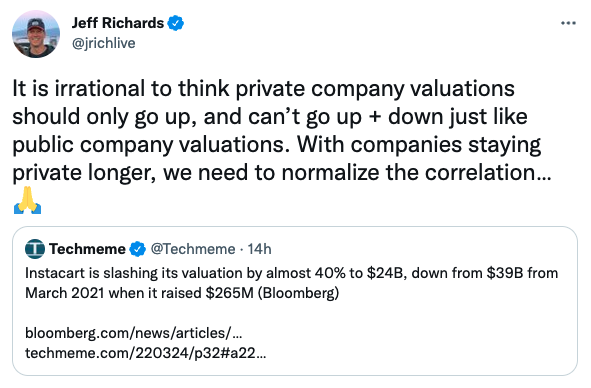 Yep. There’s no avoiding the market. You can put off reality by raising venture capital and not seeing a repricing until you raise again. Sure. But if you are a late-stage unicorn that has ample cash, how do you figure out your market worth if you don’t raise new funds?

If Instacart is the start of a trend, flat really could be — once again — the new up when it comes to startup valuations.

A small fact about me is that I went to school in Chicago, and thus I was in and around the city’s tech scene as a baby journalist. This meant that I went to community events, working to better understand what was going on. I met Justyn Howard when Sprout Social was a startup (it’s now public) and I got to go to Uber’s launch dinner in the city back when it was all black cars. (That’s where I met my first TechCrunch reporter, who later helped me get hired at the publication, the first time.)

Back then there was a community effort taking off called Technori, which hosted events that showed off local tech efforts. It was good fun.

Since then, Technori evolved into a media play of sorts, with a podcast and pitch events, helping startups raise capital via equity crowdfunding. I got back into sync with the company when its CEO, Scott Kitun, had me on the podcast. And now Technori is back in our lens because it’s being sold to KingsCrowd, a service that vets and rates startups raising on online platforms. Given that Technori evolved into a platform to help folks raise, the tie-up seems reasonable.

The transaction was all-stock, Kitun said. KingsCrowd also has a media strategy, so the two firms have more than a little overlap.

Kitun told The Exchange in an interview that he’s excited about the Technori-KingsCrowd deal because it will make vetting startups looking for equity crowdfunding more data-driven, instead of based on his instincts. We’ll have wait to see whether, in time, the pair of companies can drive more total capital into the startup market via the fundraising mechanism, and how much of that lands in Chicago.

Widening our lens somewhat, recall that Public recently bought Otis, looking to add more investment variety to its platform. We can somewhat put the Technori and KingsCrowd deal under a similar umbrella, in that the duo want to make one for of newer investment into the hands of the regular person.

This is likely not the last we’ll hear of Kitun, as he’s a co-founder at SongFinch, a separate company.

Changes to the experts program

This week I changed roles at TechCrunch, swapping my full-time reporter hat for the editor in chief gig at TechCrunch+. Long-time readers of The Exchange’s on-site posts and newsletter will know that much of my work in the past few years has been on the paid site. I am not stopping my writing entirely, but we are aggressively expanding the TechCrunch+ team. So, strap in if you are not yet a member. (For U.S.-based folks, apply the discount code EICEXCHANGE at checkout for 25% off.) It’s going to be one hell of a year.

We are making some changes, including a winding-down of the Experts program that has run for a few years. An effort to create a database of startup servicing companies by activity — SEO, say — was part of our general vibe of helping founders build. But from here on out we’re going to evolve the effort into pieces that are more targeted at squeezing insights from different operators in the market, more than creating a list of possible vendors.

This means that we’re leaving a little fruit on the vine, however, so one last note from Experts land about a participant. Growthcurve is the final company we’re including in the old format. As per that old structure, folks wrote in endorsing the group. Mariam Danielova of ANNA Money says that they are reliable, results-oriented, [and] data-driven,” which is about all that you can hope for from a growth-marketing team.

Something I learned while clearing the TechCrunch+ decks of prior efforts, and thus spending time reading through older interview files and the like, was the lingering importance of SEO. It came up in Growthcurve founder Mulenga Agley’s notes that I parsed, and I wonder if in the new iOS 14 world that we live in it will become all the more important? If so, bully for Google I suppose.

Regardless, The Exchange’s own Anna Heim will still be taking on some how-tos that feature external operating experts. It will just look a little different this year. Thanks to everyone who took part in the past and to Growthcurve for being the final entrant in the ledger.