Companies from across the industrial spectrum often rely on a migrant workforce, with data from the International Labour Organization indicating that some 169 million workers travel abroad for employment. But being away from their domestic jurisdiction and financial infrastructure presents a host of challenges, including what is probably the most important part for the worker themselves — how best to get paid.

From the company’s perspective, meanwhile, they may have to administer payments for workers hailing from multiple different locations, many of whom are in temporary or short-term placements.

Managing all of this administration, and ensuring that the workers are compensated in good time, is harder than many on the outside might realize. And it’s a problem that German startup Kadmos is setting out to tackle with an end-to-end platform that helps employers remove the friction and many of the costs associated with paying their cross-border workforce.

Just four months after announcing a $8.5 million seed round of funding, Kadmos today revealed it has added another €29 million ($29.5 million) to the pot via a series A tranche led by Blossom capital, with participation from Addition and Atlantic Labs.

Given that migrant workers are — by definition — away from home for the specific purpose of employment, they also need to be able to spend what they earn. Sometimes they may get paid in cash, which means they can spend the money locally, but then they may be faced with exorbitant transfer fees when it comes to taking the money home with them. On top of that, many migrant workers need to send money home to their family, which is often a chief reason for them working abroad in the first place — again, they may be hit with sizeable fees with cash transactions.

Alternatively, a company may elect to pay their workers through intermediaries such as local banks, remittance companies, agencies, or other third-parties, which not only includes a lot of fees, but significant paperwork and delays too.

A little more than a year on from its inception, Kadmos is already working with shipping companies who are using an early iteration of its service to pay their seafaring workforce.

For employers, Kadmos provides a centralized salary payments platform for making and tracking payments, regardless of where the worker hails from. 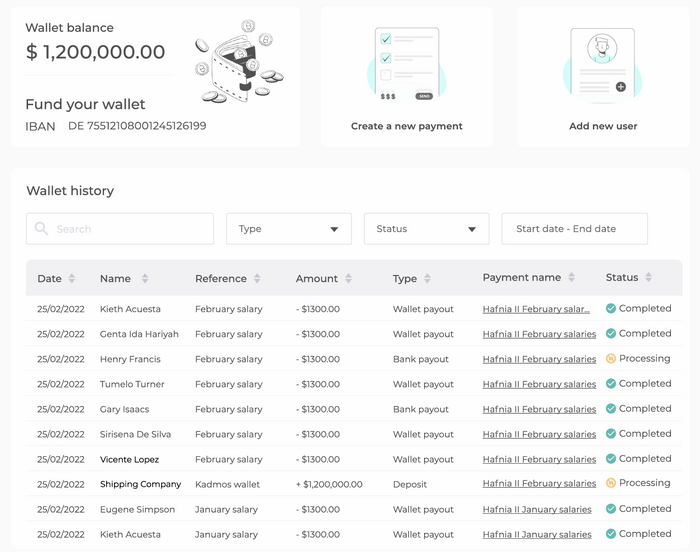 In terms of how all of this is set up, an employee must of course be working for a company that has decided to use Kadmos. The employer onboards them through their own dashboard, and the worker receives a link to download Kadmos and sign up.

On the employee side, Kadmos serves up a mobile app replete with e-wallet that holds workers’ salaries in U.S. dollars or euros, while also allowing them to send money home instantly, with predictable set fees. And importantly, Kadmos also provides workers with their own debit card that is tied to their digital wallet. 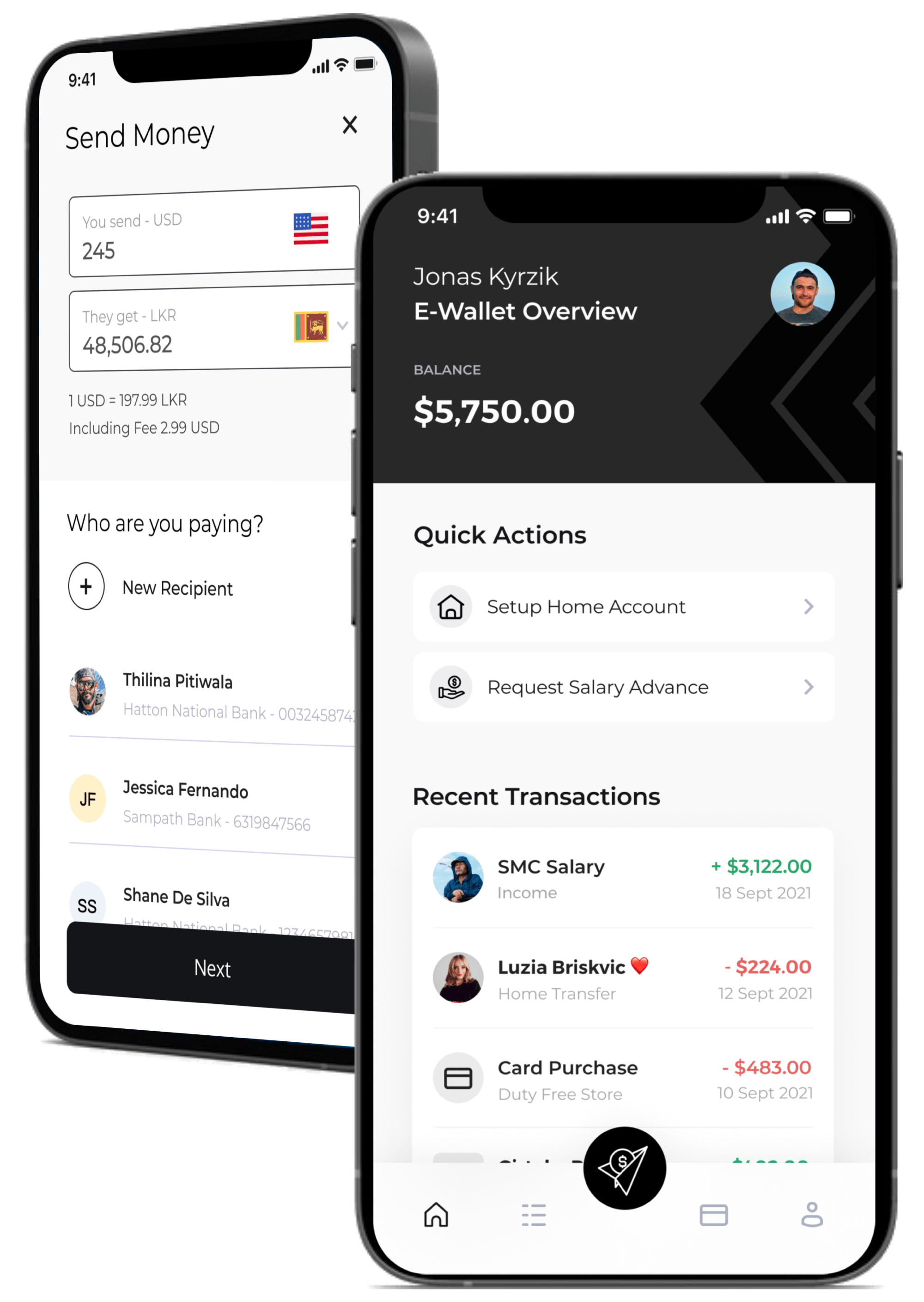 Instinctively, limiting payments to euros or dollars might be a little on the restrictive side, particularly given that migrant workers will likely be coming from any number of countries in the world, and traveling to an equally vast number of countries. However, cofounder Sasha Makarovych noted that the shipping industry primarily pays in those two currencies.

“The current industry needs are predominately for USD and EUR, since those are the currencies with which seafarers are paid,” Makarovych told TechCrunch. “For seafarers, it is a significant benefit to be able to hold their salary in ‘hard currencies’ (i.e. a stable currency).”

This does, of course, mean that workers will likely have to transfer money frequently, either when they’re spending it, or sending it home. And this is where Kadmos’ sub-1% markup enters the fray, which Makarovych says compares favorably to the typical 1.5-4.5% that traditional banks may charge. So if they use their debit card to spend dollars / euros in a country with a different currency, they will automatically be charged at the Kadmos rate.

However, if the company extends into other industries in the future, is there scope for Kadmos to offer workers options to get paid in other currencies?

“Yes, we are looking into these possibilities,” Makarovych said.

In effect, Kadmos embodies the modern fintech movement. It has many of the benefits of a modern challenger bank such as Monzo, in addition to cross-border payment features similar to the likes of Wise or remittance platforms such as Remitly. But according to Kadmos’s other cofounder Justus Schmueser, the main point to all this is that it’s not just another B2B or B2C fintech — it is built to solve a very specific problem.

“Kadmos’ approach can be classified as B2B2C,” Schmueser said. “In this sense, our scalability and cost of acquisition is much more efficient since obtaining a few different employers who use Kadmos to pay their employees can lead to thousands of new end-users for the Kadmos app.”

By solving two problems at once — helping migrant workers get paid, and alleviating many of the costs and administrative burdens for employers — Kadmos sits in a pretty strong position as the world continues to emerge from lockdown and normal business resumes.

“We want to make the payment process easier for companies, and at the same time make the process of receiving and spending that money easier for the workers as well,” Schmueser added. “Kadmos’ focus is really on using technology to provide a solution to the severe restrictions placed on the financial freedom of cross-border employees.”